I've noticed that whenever the other team has a medic consistently using Kritzkreig, particularly on that last round of dustbowl as Red, I can never effectively counter it as heavy. Often ubers are used to try and kill the medic and push forward, but I notice that most of the time the medic just runs away, and Blu are pushed back as soon as another Kritz goes up. It's typically worst when Kritz stickies are being lobbed in every half a minute.
I was wondering if anyone has any tips on how to deal with it cause most of the time I just end up leaving out of frustration after a few rounds of getting nowhere. 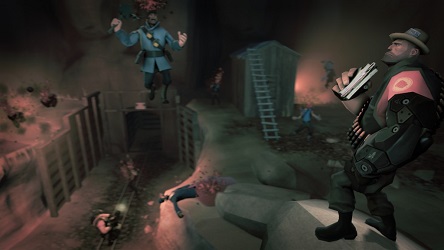 I wish I did. I'm interested in hearing any responses after today's encounter, Fiend. We were slaughtered, weren't we.
Top

LadeeeDuke wrote:I wish I did. I'm interested in hearing any responses after today's encounter, Fiend. We were slaughtered, weren't we.

Your medic with uber, being followed with a pyro or solly to help.
Top

Apart from countering with uber, if you're alone as a heavy, you're only hope is to surprise the other heavy up close, preferably above him or to the side off of one of those cliffs by the last point. Stealth is how I rack up a lot of kills on Dustbowl.
Top

Engies who build lvl 3 sentries. Other Engies who help them. Teammates who protect them. You need teamwork basically.

If you don't get a lvl 3 sentry up promptly on BLU, you're just giving RED free reign to lob crit stickies at you. It's difficult to counter a crit Demo as a Heavy. A lvl 3 sentry has no such difficulty, especially a wrangled one from either the tire pile, or the end of 3rd street.

Or just have a decent reflecting pyro on your team.

After at least one reflect (assuming the pyro aimed the reflect at the medic) any damage at all on the medic will kill him so just spam instead of running if you are confident in your pyro.

BTW, this assumes krit demo or solly. Anything else except another pyro will basically be insta death unless they are very good at positioning.

As a Medic with a fair amount of history using the Kritzkrieg on RED (now I'm into Vaccinating, because it's just more entertaining overall), I can agree that Sentries are a reliable way to keep them from getting too close to where your team's waves are preparing to "break" upon RED defense. After all, Kritz-charged foes aren't invincible, they're just scary. But now I'd like to talk a bit about Kritz Medic psychology.

Medics with Kritzkriegs will inevitably want to run away at the first sign of danger, because the rate at which the Kritzkrieg builds up is fast enough to make one want to keep living to get "that last charge," but slow enough that one doesn't want to die and start from zero. That means that Kritz medics will place their survival above all other teammates in hope that they can live long enough to find a Soldier, Demo, or Heavy to make the battlefield safe for them. These three classes can put out the most amount of damage, but just as important, they have a lot of HP.

Now for ways to counter a Kritz Medic, as perceived by myself.

Regular ubers are a good way to scare them away or kill them, but depending on how big your team is, a Sniper might be the most effective way to keep them running for cover, away from the front lines. Scouts can sometimes get close enough to dispose of vulnerable Medics, but they are easily wiped away in an instant if the Medic is fully charged, and/or the person the Medic's healing has good spatial awareness.

You might consider getting your own Kritz medic if the teams are small enough, and hope that you or the person you Kritz charge are talented enough to hit the enemy Medic. But as for Pyros, blasting away a Kritz Medic or reflecting projectiles... ha. Pushing the Medic away would only work if the Medic's kritz-charging a Pyro, which doesn't happen unless circumstances are just right, or the Medic's desperate. I've seen a few lucky reflections when Kritz-charging soldiers, but there's something you should always remember.

It takes a fair bit of naïvety to waste one's semi-precious Kritz charge on somebody failing to hit or in the process of reloading, when alternative targets are close at hand. If your target isn't killing 90% of the time he or she is charged, the better part of the enemy team will swarm like [justifiably] angry dogs. But when you're a Pyro on the receiving end, trying to reflect somebody's projectiles, you probably won't be able to anticipate, or even see, who the Medic's going to switch to. I've seen it happen countless times... Fearless Pyro, zoning in on a Soldier, reared and ready to play tennis... and then suddenly, disappears in a Kritz sticky bomb explosion. It almost brings a tear to the eye.

IN CONCLUSION...
Don't make anybody play Pyro who doesn't want to, when the enemy team's puttin' on the Kritz. Put your most talented Sniper(s), Engineer(s?), and regular Medic(s!) to work. I haven't mentioned Spies because their performance is spotty, by they might be able to stop a Kritz Medic. Again, they're not invincible, just scary.

Maybe I'll let you know how well the Vaccinator stands up to Kritz charges once I've gathered enough experience. It charges up really quick, but it's hard to get the timing right, and 75% off the damage of a Kritz rocket (270) is nearly 70... Almost half of the Medic's health. I'm finding the Vaccinator's great for all situations BUT when you're up against a Kritz charge, to be honest.
Top

Get right into the face of whomever is kritzing. Seriously. Everyone expects you to run, and when you do, you get mowed down. Instead, just get in their face and focus damage.
Top

That corner you are talking about is tough because the medic can hide while stuff is fired around the corner. Its narrow, so getting a flank on the medic is tough, and there isn't space to drop on them without being killed first. I find myself agreeing with Ohnoes (which could be worse, at least it isnt Mateo I'm in agreement with) that a good pyro is a help as long as it isnt a kritz heavy coming around. If you can get the engi to set up by the tires as Crusty pointed out, that helps. Too many times people dont build there which also leads to getting flanked up the back stairs. Another idea is a second medic with a kritz as well. Demo krtiz spam over the corner keeps the Red medic back along the bridge where he is much more vulnerable.

The best defense is a good offense. Kill their medic before they get yours, or, during it try and get behind the person they are kritzing and focus down the medic.
Last edited by Larry on Wed Jul 02, 2014 10:44 am, edited 1 time in total.

what domer and larry said.

that limited mobility can be so frustrating as heavy. You've got to outmaneuver the kritz and be aggressive with the medic.
Top

F13ND wrote:I've noticed that whenever the other team has a medic consistently using Kritzkreig, particularly on that last round of dustbowl as Red, I can never effectively counter it as heavy.

Don't forget the whole "last round of dustbowl particularly" part y'all. That was why I harped on BLU Engie play in my first post.

I totally concur with the get in their face part about the Kritz. You gotta jump in that Demo's face, and don't backpedal. This also illustrates a wider point about the Kritz; it will make players attack you as opposed to the Uber, which makes people run away.

If you are going to use a kritz you use it offensively. So back up if your out of range or on the edge of it. If you are really close, your just gonna have to go for it. Try and use a corner to get the drop on them. Or hide somewhere and let them go past, then jump out behind them.

F13ND wrote:I've noticed that whenever the other team has a medic consistently using Kritzkreig, particularly on that last round of dustbowl as Red, I can never effectively counter it as heavy.

Don't forget the whole "last round of dustbowl particularly" part y'all. That was why I harped on BLU Engie play in my first post.

I totally concur with the get in their face part about the Kritz. You gotta jump in that Demo's face, and don't backpedal. This also illustrates a wider point about the Kritz; it will make players attack you as opposed to the Uber, which makes people run away.