A place to discuss other games such as World of Warcraft, BF2 or Red Orchestra
Post Reply
243 posts

There's also going to be trophies of Roll and Proto Man

A footnote at the bottom; a future update will allow for Amiibo support for the 3DS version down the road. I hope it's not going to be an exclusive feature of that new 3DS model they're working on.

Furthermore, new secret character pages.
VIEW CONTENT:
Ganondorf
R.O.B.
Lastly a game mode for the Wii U is being teased in today's screenshot. The mode's name itself is pixellated out but it will involve the Master and Crazy Hands.

I can't help but imagine that image having dirty words under the pixelated areas.

There's supposed to be an Amiibo adapter for the current 3DS that uses the infrared sensor to communicate with the system, so the figures shouldn't be exclusive to the new model; just a little easier to use with it.

Going by today's Nintendo Direct: Downloadable characters are confirmed, the lineup will be expanding. The first DLC character has already been named and this character will be available in Spring 2015 for free for people who have both the 3DS and Wii-U versions of the game.

The character? It happens to be one of the two that everyone wanted but was disappointed that he/she wasn't present. I'm excited.
VIEW CONTENT: 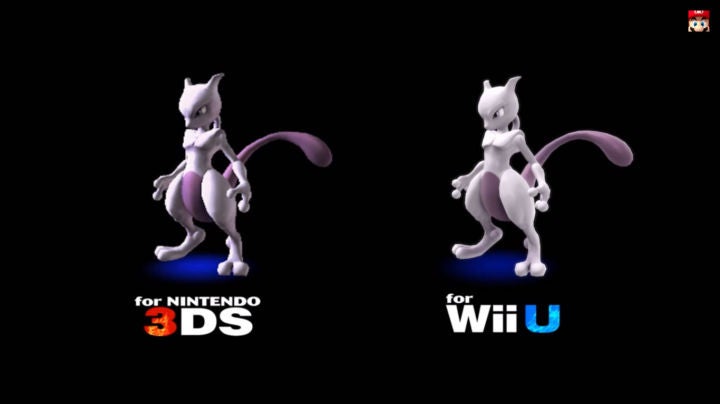 There's also an 8-player mode in the Wii-U, whether or not that's going to be available on launch is another question entirely. Last thing I can get from the smash bros reddit, the DKC Returns themed stage will feature two planes of combat
Spoilered for large image.
VIEW CONTENT:

Too bad you have to buy both copies of SSB4 for the 3ds and the wii u :/

I was wondering where Mewtwo had wandered off to after Melee. Never really played as him, but I'm excited nonetheless. Yay more content!

8-player mode sounds like utter chaos. But maybe it's supposed to? Time will tell, I guess.

I'm really digging that DKCR stage. One of the things I think they really managed to do perfectly this time around is make the stages feel like they're actually set in the worlds they represent, and re-creating that chunk of DKCR world 1-1 verbatim is a brilliant way to do that, especially incorporating the background area as a playable space. Really makes it feel like you're stepping into DKCR.

Now I'm kind of hoping for a Tropical Freeze stage, or maybe even something based on the classic DKC trilogy.

Too bad you have to buy both copies of SSB4 for the 3ds and the wii u :/

What i'm hearing: he's free if you get both, but you can still buy him separate if you opt for only one version.

The music section of the Wii-U side of things on the website has a mostly reveal of the stage selection. From the looks of it, there isn't a whole lot that hasn't been said already, but I see a good number of stages returning from Brawl: Delfino Plaza, Figure-8 Circuit, Luigi's Mansion, Brinstar, Port Town Aero Dive, Bridge of Eldin, Temple, 75m, Halberd, Fire Emblem, Skyworld, Smashville, and is that SSB1's Kongo Jungle I see in there?

There's only four stages I see that are shared between both versions: Battlefield, Final Destination, Boxing Ring, and Dr. Wily's Castle.

Unlockable songs will be opened the same way they were in Brawl: find the CDs when they spawn in matches.

Event matches are also making a return for those who liked them. Single player and two-player co-op event matches will be available.

How much would mewtwo dlc (if it is a dlc) be?

InBOUND HD wrote:How much would mewtwo dlc (if it is a dlc) be?

It is a DLC, and since it was only just announced there's no price yet.

So with DLC characters confirmed to be happening, i'm curious who people want to see added to the game that didn't make the initial roster. We're already getting Mewtwo so that base is covered, but there's plenty of other characters in the Nintendo-verse, and we have some leeway with third parties such as Sega, Bandai-Namco and Capcom (and in some respect Ubisoft and Konami).

There's two characters I really want to see hit Smash Bros. in some form of DLC. I really think if they put a little effort into it, Tails would make an excellent character. He has a defined playstyle and form of combat in the first (Genesis) and second generations (Dreamcast/GBA) of Sonic titles so I really think he could work. Have him be an above-average speed character like Mario or Pit. Give him three air-jumps like Pit or Charizard. Many of his attacks can incorporate tail attacks like he uses in Sonic Adventure and Sonic Advance (his running attack could be the spinning tail item from Adventure). For specials, his Down-B should still be the spindash, his Up-B would be free-flight, similar to ROB or Brawl's Pit. Standard and Side specials could be abilities from his spinoff game Tails' Adventure, such as a Ring Bomb attack or other gadget-based moves. His Final Smash could summon the Tornado-2 for a bombing run. The potential is there and I would love to see Tails get some more spotlight time; it feels like Sega keeps writing him off to the sidelines for everything. Amy too.

The second character, and I mentioned this in the Club Nintendo post-play survey: Mike from StarTropics. StarTropics is the only Nintendo franchise that is not acknowledged by Smash Bros in any way beyond the system chronicle in Brawl. We get mention of all these other franchises that Americans have never heard of (or at least not by their Japanese names, such as Mother or Panel de Pon, Earthbound and Tetris Attack/Puzzle League respectively) but somewhere along the line StarTropics fell off the radar, despite having two late NES titles that were actually pretty fun (they played like Zelda, top-down dungeon exploring with some awkward jumping). While I've never finished either game, I still feel that Startropics should be in Smash Bros somewhere and having Mike as a playable character would be great in that respect. On doing some research, it's possible that he's not included nor is the series mentioned because StarTropics has never been released in Japan; Japanese audiences may not know about it and given that Japan is the main marketing target...

Some other potential DLC characters I would like to see:
Magnus (Kid Icarus Uprising) as a fully playable character and not just an assist trophy; honestly I'm surprised this didn't happen.
Rayman (Rayman), he has a trophy in the Wii U version for some reason despite no Ubisoft content in the game whatsoever, so why not?
Ivysaur (Pokemon R/B/Y/G), Charizard got his own character, why not Ivysaur? Or Squirtle for that matter. I liked playing as Ivysaur.
Geno (Super Mario RPG), everyone wants him. If Nintendo could negotiate the rights with Square to bring him back that would be awesome.
Black Mage (Final Fantasy 1), since we're on the subject of Square, a generic Black Mage would be pretty cool to play as.

I agree on Tails. It'd be nice to see a second Sonic character, period.

Speaking of Sonic characters, I'd be interested in seeing Dr. Eggman playable. He could either run around on foot or fly in his little car-thing. His Final Smash could be any of his machines - even just flying around the stage with the wrecking ball from Green Hill Zone in Sonic 1 would be pretty neat.

- Dixie Kong: a more air-based version of Diddy thanks to her ponytail, perhaps with an overall shorter attacking range to balance out her enhanced aerial maneuverability.
- NiGHTS: another SEGA character, albeit one with nowhere near Sonic's popularity. There are a lot of ways they could go with it though, and NiGHTS' games deserve more attention due to just how unlike anything else they are.
- Beat (Jet Set Radio/JSR Future): as long as I'm looking at semi-obscure SEGA characters ...
- Metal Sonic: just a Sonic reskin most likely, but a cool-looking one. We've already got Dr. Mario, so reskin characters aren't out. His Final Smash could work identically to Sonic's, but be based around Metal Sonic's electric attacks in Sonic CD.
- Waluigi: it won't happen since he's already an Assist Trophy, but I really want to see him evolve into more than a one-dimensional filler character. Wario has one of the most fleshed-out personalities in the entire Mario cast - even more than Mario himself, although that's not saying much - so it feels weird that he's partnered with a character whose entire depth is "he's Wario's partner in crime and Luigi's rival."

Quick PSA, Smash Bros. 1.0.3. update is on the eShop. You'll probably need it for online play.

Just as an FYI, I installed SSB 1.0.3 and experienced severe lag on the home menu afterward, which got worse and worse the longer the menu was left open. It looks as though the new patch may include a nasty memory leak. I didn't do anything else to the system today before installing the patch. It seems to have stopped lagging after running SSB for a bit and quitting (it took nearly a minute to get back to the Home screen vs. the usual 10-15 seconds, and the Home menu took over a full second to respond to any input), but be aware of it in case it has other hidden issues.

DLCs eh? Oooo lets get the whole DK Crew in the game. All we need is Lanky Kong, Tiny Kong, and Chunky Kong. Nintendo make the dream happen!!!!