A place to discuss other games such as World of Warcraft, BF2 or Red Orchestra
Post Reply
517 posts

I like how they're depicting the new Team Magma and Aqua. 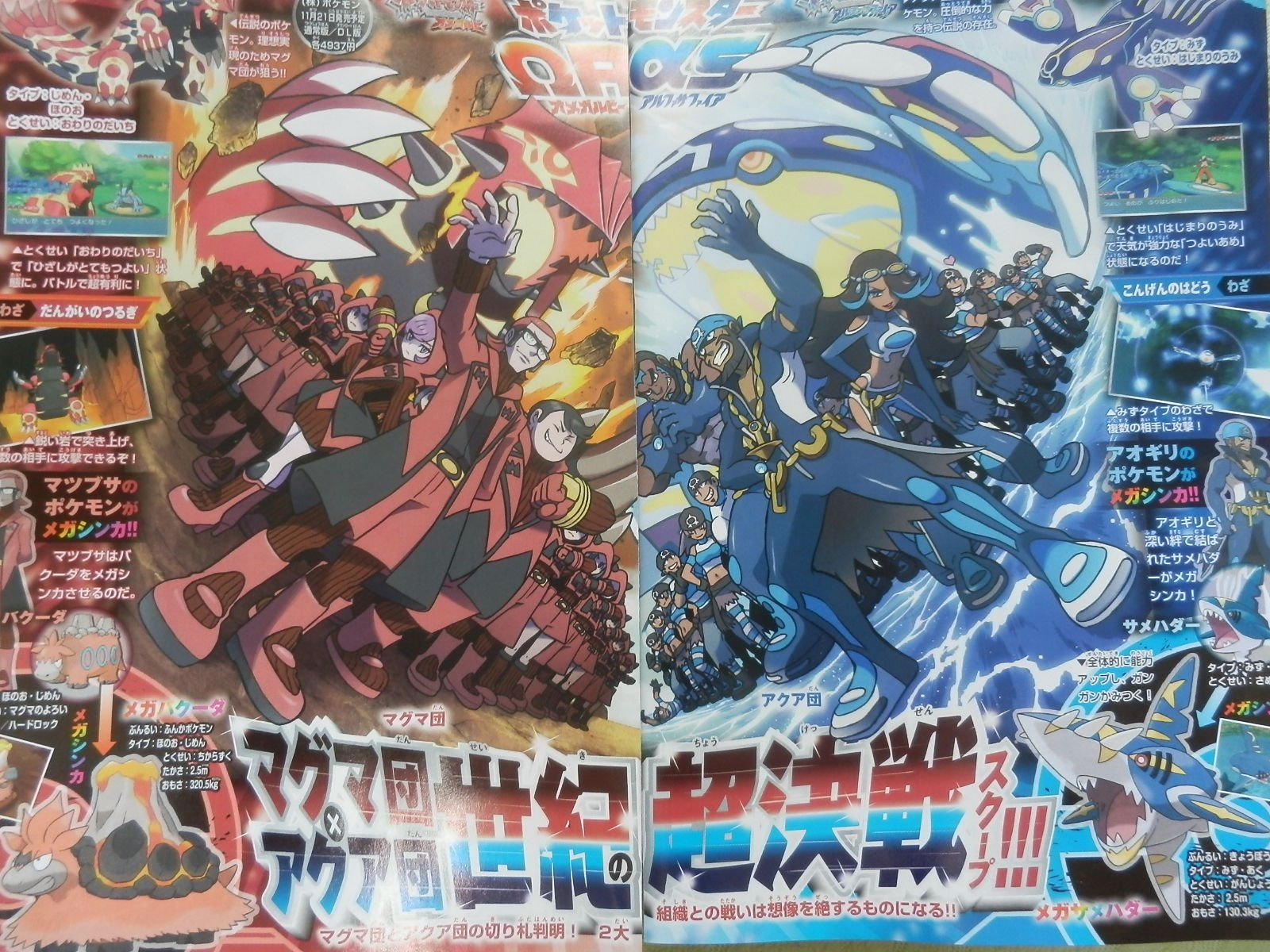 You look at Team Magma on the left, and you see that they're a really disciplined, organized group. Maxie is the evil overlord, Courtney is the no-nonsense second-in-command, and Tabitha is the kinda goofy guy who can be serious when he needs to be.

Then you look at Team Aqua on the right. Archie looks so boisterous, Matt is ready to crack some skulls, and Shelly looks like she's going for the stereotypical "sexy lady pirate lord" look. And all the grunts are goofing off. One of them fell over and another is swooning over Shelly.

Team Aqua are pirates though, pirates don't play by the rules.

- Primal Groudon's ability is known as Desolate Land in English. It creates "extremely harsh sunlight," which acts like regular harsh sunlight except that it cannot be overridden by other weather-changing moves, and Water-type attacks are completely nullified (what was that we were saying a while back about a 4x Water weakness?).
- Primal Groudon's new signature move is called Precipice Blades in English.
- Primal Kyogre's ability is called Primordial Sea in English. Predictably it's a mirror version of Desolate Land, causing "heavy rain" which cannot be removed and extinguishing all Fire-type attacks. Smogon is probably going to ban these two before the games are even released. It'd be a ban that makes sense to outsiders for once at least.
- Primal Kyogre's signature move is called Origin Pulse in English.
- According to the ORAS mini-site, both P-Groudon and P-Kyogre's abilities deactivate as soon as they leave the field, meaning that you can't swap them in, start perma-sun or perma-rain, and swap them out to keep the weather going.
- Rayquaza is shown off, as are the Megas for Camerupt, Sharpedo, and Gallade. Camerupt looks kind of ridiculous, and disappointingly it appears that attacks which involve shooting straight up from the user don't perfectly align with its volcano's peak. Sharpedo's snout-blades aren't always visible, which actually makes it look a lot better than it did in the CoroCoro picture, if not necessarily a huge change from its normal form. Mega Gallade looks awesome in action.

Also, the US ORAS site states that the previously-thought-to-be-Japan-exclusive demo is coming to the west! From their wording, it sounds like it's going to be released before the games themselves, and to "stay tuned for details." The page says "You can play the ORAS Special Demo Version as many times as you like," seeming to imply that it is not capped at a limited number of game launches like other 3DS demos. From the screenshots, it appears it takes place in Mossdeep City and will have you battling Tabitha and Matt from Team Magma/Aqua. You can also send some things from the demo to your ORAS game via Pokemon Link, but it is unknown what that will include. There are heavy hints in the page text that it will be an as-of-yet unannounced Mega Evolution.

But then again, Kyogre was the more used of the two originally because of how amazing Rain is compared to Sunlight and Sandstorm (and especially Hail)

The 2DSes are transparent blue and red, mirroring the original Sapphire and Ruby GBA cartridges, which I think is a neat touch.

From now until October 31, you can get a Super-Size Pumpkaboo through wi-fi Mystery Gift. What makes this one extra-special is that it can potentially have its HA, Insomnia, which is otherwise unobtainable on Pumpkaboo of the super-size variety, being limited to the regular-size ones in the Friend Safari. There's a Halloween-themed PGL competition coming up in which you have to have a super-size Gourgeist on your team, so this is a great opportunity to make the HA available for that if you're looking to enter.

Will T. wrote:From now until October 31, you can get a Super-Size Pumpkaboo through wi-fi Mystery Gift. What makes this one extra-special is that it can potentially have its HA, Insomnia, which is otherwise unobtainable on Pumpkaboo of the super-size variety, being limited to the regular-size ones in the Friend Safari. There's a Halloween-themed PGL competition coming up in which you have to have a super-size Gourgeist on your team, so this is a great opportunity to make the HA available for that if you're looking to enter.

You failed to mention that it comes with a Rocky Helmet, which is also normally obtainable once per playthrough. I could care less about Insomnia, but I like having duplicate items around for Pokemon that utilize same or similar items. Less shuffling things around when I make team substitutions.

Unsurprisingly, Rayquaza also gets a Mega form, with another Uber-ability.

Delta Stream produces a new type of weather and works like Primal Groudon and Primal Kyogre's abilities. It cancels the current weather and prevents all other weather from happening for as long as Mega Rayquaza is on the field..

It also nullifies the weaknesses of the Flying type when it's active (so Electric, Ice, and Rock deal neutral damage to the Flying type). Meaning Mega Rayquaza resists Electric, is neutral to Rock, and is only 2x weak to Ice instead of 4x.


Rayquaza also gets a new unique move called Dragon Ascent, which despite its name is a Flying-type attack.

I find it a little odd that they aren't calling it a primal reversion like Groudon and Kyogre given that they're a trio, but at least its mega-evolved power is on par with them. I'm liking his new look as well. Very Eastern-dragon-ish.

Also, the ORAS website now mentions Rayquaza's role in ending the battle between Groudon and Kyogre, potentially hinting that it will play a role in the story similar to Emerald. It is also "said to achieve Mega Evolution in a unique way - unlike that of other Pokemon."

They've also revealed Mega Latios and Latias, and also the fact that you can fly around on them. As in the originals, Latios is exclusive to Omega Ruby and Latias is exclusive to Alpha Sapphire. But they'll be giving out the Eon Ticket as an event so you can get the other one.

Going back on the flying thing, you can fly high in the sky on them and discover various islands where you can encounter various non-event legendaries like Zekrom and Dialga. You can also encounter regular wild battles in the sky, presumably against birds and stuff.

People have been commenting that the golden rings out of which the legendaries are emerging in this picture strongly resemble those on the leaked event legendary Hoopa. There's also a sillhouette on the right page below Zekrom and left of Reshiram that looks a lot like Hoopa. Coincidence?

A couple more scans show some info on the PokeNav, which is now called the MultiNav. It combines the features of the Holo-Caster/PSS in XY with the original PokeNav features, and also includes "a new way to find hidden Pokemon," whatever that means. This new feature appears to be related to the clip in one of the trailers in which Brendan was seen sneaking up on a Pikachu tail sticking out of the grass. Maybe we're getting something that's like a not-sucktacular version of the Poke Radar?

Don't forget, from today until the 26th, you can pick up a code for a Shiny Gengar that comes with a Mega-Stone and knows Sludge Wave (which is otherwise unobtainable by the Ghastly line) at your local Gamestop. While supplies last of course, but I got there as soon as the place opened and there was no one else there for Pokemon so it may not be that big a deal. And this time there was also no hassle with the employees; she just smiled and handed me the code. I asked her if I could get another but they're limit one per customer, for obvious reasons. If you want more than one code you'll have to go to multiple Gamestops.

And also remember the Diancie codes start being handed out on the 27th as well.

Keep an ear to the ground both today and tomorrow, because the "Special Demo Version" of ORAS is supposed to release on Wednesday. It's been announced for a huge number of countries ... but not for the United States. It's been announced for South Africa, for crying out loud. The US ORAS website says it will be here, but they've announced how to get it pretty much everywhere but here. The US still has to "stay tuned." They're still announcing how to get it in some countries as time goes on, with Spain being announced only today, so they're clearly not out of countries to announce. Hopefully the US is in there somewhere.

Straight from Pokemon's website, this is how we're getting the demo.
http://www.pokemon.com/us/pokemon-news/ ... iner-club/

In summation:
Sign up for a Pokemon Trainer Club accout, you probably had to do this while setting up the Global Link, as I don't remember doing it but I have an active account associated with my email address.
Opt into the bit about receiving marketing crap through email (basically their newsletter) by October 20th.
-Check the box during account creation or change your settings under OP Tools Dashboard > Edit Profile

Be sure that pokemon@email.pokemon.com is in your email's contacts list so that the newsletter isn't dumped in the spam folder.

The newsletter will have a code for an eShop download.

The main Ruby/Sapphire website also confirms the return of Super Training, though I don't think that's a surprise.

The ability to fly will be restricted to (mega?) Lati@s; you'll have a key item that lets you fly around. Wild battles are not Sky Battles, as some of the screenshots show Marshstomp and Shiftry participating in wild battles. You can seemingly dismount anywhere, though I bet some restrictions will be in place in case you haven't been there yet. From the sky Hoenn is pretty detailed (at least as far as the 3DS hardware allows) and there is clearly an implemented time system this time around as day and night are discernible in the screenshots.

This is hard to be cool and suave while being informative at the same time. Goddamn my coolness.
In my experience, common sense isn't too common.
Top
Post Reply
517 posts